In the holiday season of 2013, I opened my 3DS. Honestly, I don’t remember why I wanted one in the first place, but it was all I could talk about. So my mom bought me my purple 3DS and two games; Luigi’s Dark Moon and Animal Crossing New Leaf. I spent hours playing Animal Crossing and didn’t devote my time to anything else. Eventually, I got sick of the game and set my 3DS aside for some time. Lately, I have made it a goal of mine to use my 3DS more instead of neglecting it. Yoshi’s Island is a game I have been slowly playing through until completing the game yesterday. Here are my initial thoughts. 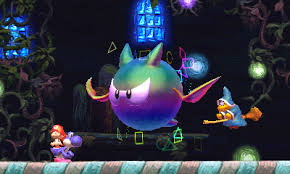 Yoshi’s Island takes place immediately after Super Mario World where a stork is delivering baby Mario and Luigi to new parents. Kamek thwarts this plan by kidnapping the stork and baby Luigi. Yoshi now with little baby Mario attempt to rescue Luigi and the kidnapped stork. Personally, I could care less about the actual story. I care about the levels and the ease of playing the game.

I will say some of the levels were incredibly fun. In the Brave the Bumpty Blizzard, Yoshi slides around and encounters penguins to interact with. The tropical world 3 is another one of my favorites from the game. 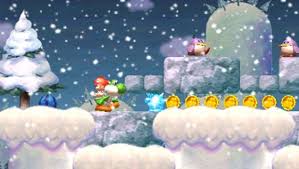 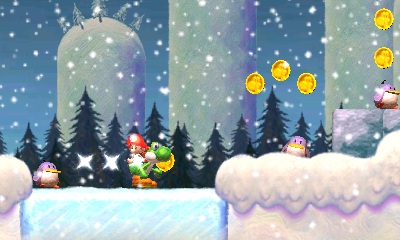 Yoshi’s Island doesn’t offer a lot of rewards for replaying the game. I mean now that I have completed it, I probably won’t play it again for some time. I could collect all the coins, but there’s no incentive for me to do that. Unless I could unlock additional content? It’s not worth it. Also I did find this game to be rather easy. Yes, I understand that this game is meant for kids so it’s not supposed to be super difficult. Still some levels in the Mario games are difficult! I miss that difficulty and challenge in the newer games.

If you’re 3DS is collecting dust on a shelf, I do recommend picking this game up. It’s adorable, cute and a relaxing game to ease into picking up the 3DS again. Now I’m incredibly excited because the next game on my shelf to play is Legend of Zelda Ocarina of Time and it’s my first time playing. I can’t wait.