Happy Fourth of July! After my hiatus from last week, I’m here to share a lengthy post about Convergence a con I attended last week. Let me tell you something, con depression is certainly real as I feel a little sad that Convergence is finally over. This post is pretty long, but I tried to sum up my happiest moments at con. This post has helped relive my most fun memories and I can’t wait for Convergence 2017 because yes, I will be there. Also I will be writing two other Convergence themed posts: Convergence Haul & Fandoms I’m, Diving into. 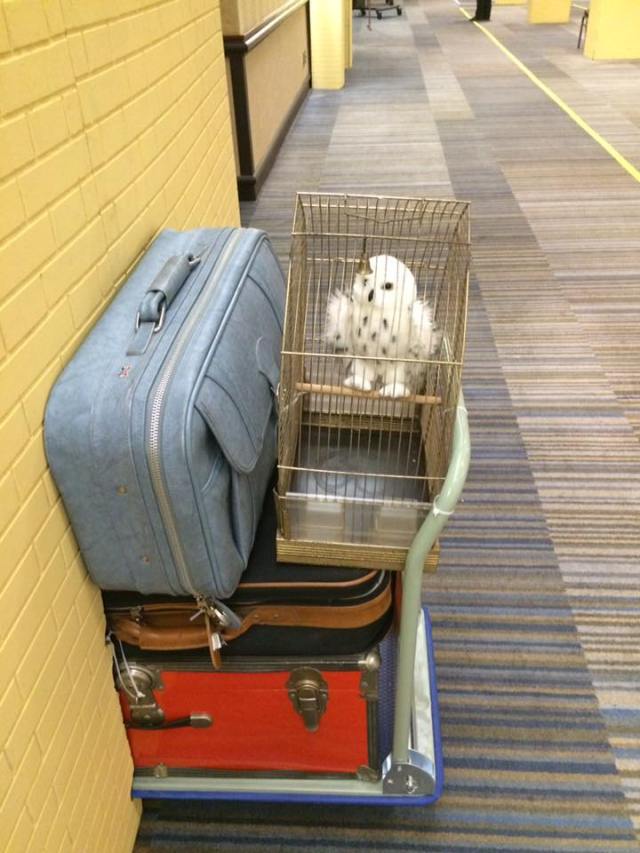 The theme for Convergence this year was focused on traveling in different fandoms. So there was an emphasis on the Hogwarts express, the Tardis, Millennium Falcon etc. There was this lovely display of the Hogwarts express and Hedwig which was heartwarming to me. Harry Potter is one of my favorite fandoms and I’m a very proud Hufflepuff.

My awesome selfie with Hedwig. I couldn’t resist because look how cute Hedwig looks!? 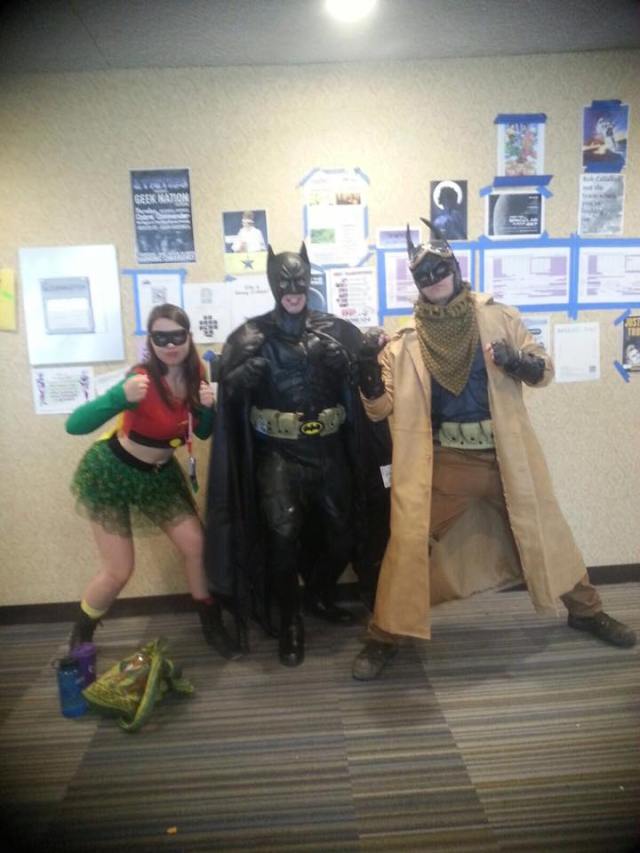 I cosplayed as Robin for the entire day on Friday. I found multiple Batman cosplays and they wanted to take a picture with me which was pretty satisfying to be acknowledged for your cosplay. Also the Batman in the middle was really funny. He called me “Sexy Robin” and would say hi to me all the time during the con. 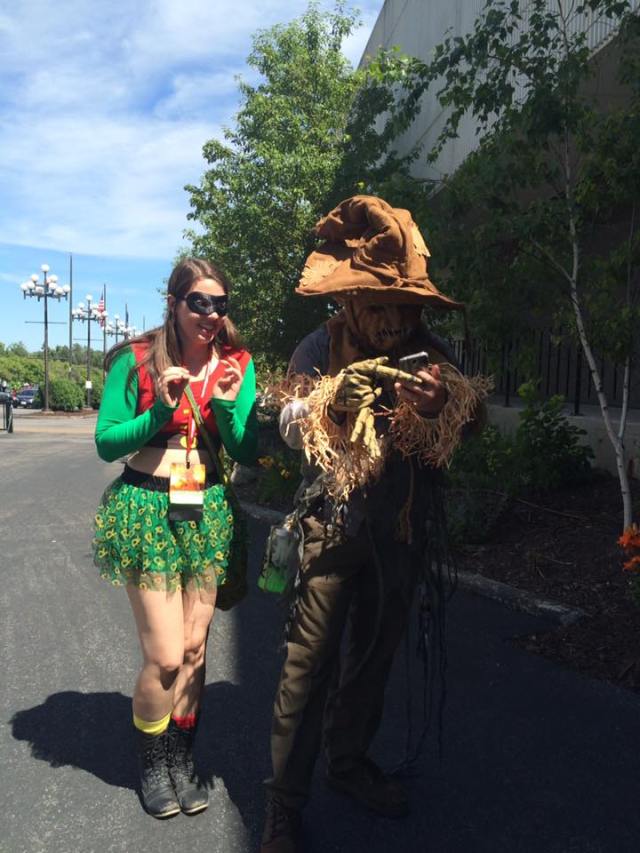 Shortly after seeing the Batman cosplayers, I found a Scarecrow outside. I had to take a picture with him because he looked really good, it kind of freaked me out. Right before Con I started replaying Batman Arkham Asylum and it was cool to see an accurate Scarecrow cosplay. 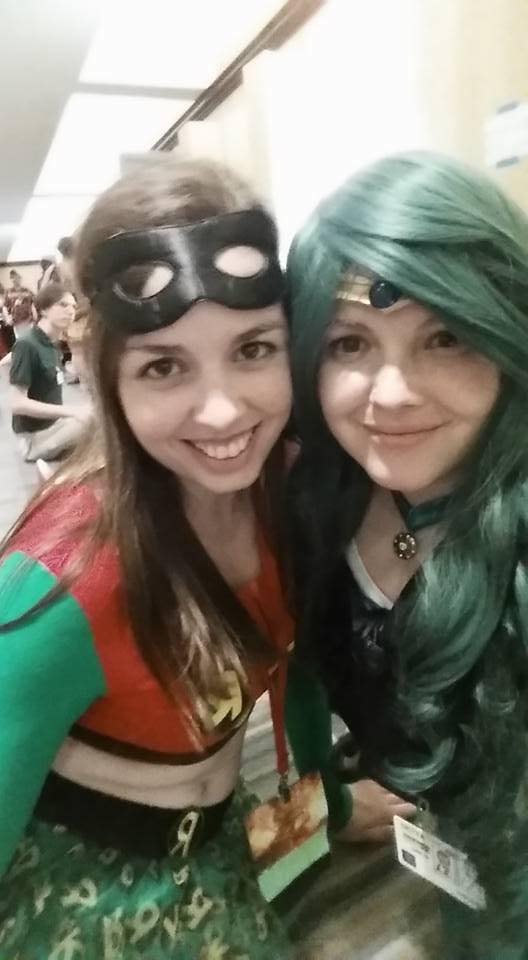 This is one of my Con friends. I met up with her a couple of times and here we are pretty bored waiting for a show. We were waiting to see Vilification Tennis which is a show where comedians insult each other. It’s incredibly offensive, but I have an interesting sense of humor so I enjoyed it. I also saw one of my favorite comedians do a stand up and I was crying with laughter. I met up with some friends from Con and we all waited in line together and to pass time we just took a lot of selfies. 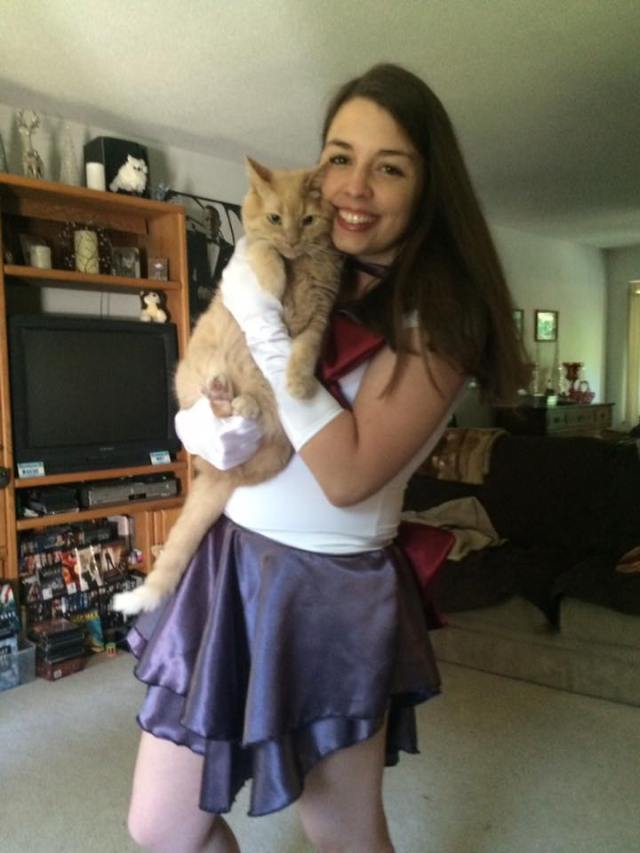 This was my last day of Con and I cosplayed as Sailor Saturn. Now is this cosplay really accurate? Meh. Though I’m proud that I helped make my own cosplay. I had a lot of help, but still I’m proud of myself. I chose not to wear a wig. I understand that would help make my cosplay more accurate, but I didn’t really want to. Wigs irritate me at times and I didn’t want to be uncomfortable all day.

I’m not sure if other cons do this, but at this con you can collect ribbons. Ribbons can be handed out by other con attendees or you can get ribbons for volunteering. I got this ribbon from Christopher Jones the Young Justice illustrator I always rave about. I absolutely love this ribbon because it combines two of my favorite fandoms.

Another Sailor Scout selfie. We were waiting for a panel titled Drinking with Geeks which basically had comedians drinking unknown bottles of alcohol and the audience could hand alcohol to the panelists. It was super funny and I’m glad I could witness, but not actually drink the liquor myself.

Look at this BB8! I found him at a Star Wars party room. Party rooms are these hotel rooms that are decked out in a theme. You can have alcoholic drinks at party rooms, but you certainly don’t have to. Unfortunately, if you aren’t 21, they won’t let you in so this was a fun new experience for me being legal.

This was from the Futurama themed party room.

My Convergence experience was really fun and I had a blast. I would even go as far as saying that this one was my favorite out of the other two I attended. I will be writing up my Convergence Haul  & Fandoms I will be diving into posts pretty soon after this so be on the look out for that. Cons are so fun and I’m glad that I went.