Conventions are some of my favorite places to be. I just feel at home with the geek community and I love meeting new people. Plus going to a convention is an excuse to take a lot of pictures because in my mind pictures equate to memories. I’m going to talk about a convention I went to two years ago called Convergence. Since I mention Convergence in previous posts, I feel like I should actually talk about why I love this convention so much.

I found out about this convention in 2012 when my friend’s mom went. I was so jealous because this just sounded like the coolest place ever. My friend and I were determined to go the next year which we did and  it was one of the most memorable events that summer. I even saw my cousin hosting a couple of panels and that was cool to see. I’m actually going to just refer to the most recent convergence that I attended which was in 2014. I didn’t go last year because I ended up going to Milwaukee for Fourth of July which was still pretty cool.

One of my favorite parts about conventions is just adventuring around. I’m a Doctor Who fan so of course I love the roaming Daleks. This one was hand made by some really awesome fans and it comes to the convention ever year. It’s fun to try and find it! I also love meeting up with people and wandering around. It’s fun to see people once a year and it feels like nothing has changed in between that time. Also conventions provide a lot of opportunity for photo ops. Below I’m wearing the mudblood sign, but there were so many “crimes/signs” to choose from. The company that takes the pictures will upload them to a site where you can have access to them. I love finding all the photo ops because again I love taking pictures. 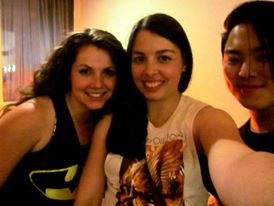 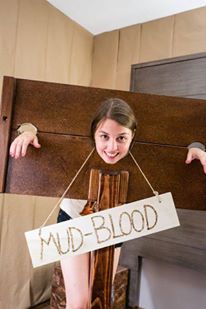 Another fun portion of Convergence is the party rooms! People rent out rooms in the hotel and then design them to fit a theme. One such party room is the Arkham Asylum party room where I met up with a Doctor Joker cos play. There was also a space lounge where you can get smoothies and such and to just hang out. Another one of my favorites is the ghost-busters party room. The ghost-busters car also hangs out outside so that’s definitely another fun thing to see while attending this con.

At conventions, I’m prone to spending WAY too much money. At this particular Convergence, I bought this really awesome Dalek mug that I still have and use every other day for my morning coffee. I have to seriously put myself on a budget or I will spend way too much money here. I also bought a Tardis necklace that was hand crafted that I wear all the time.

The panels are another favorite of mine. I like when they break down some of my TV shows or comics because it provides an interesting perspective. Some of my favorite panels were: “Asperger’s Syndrome presented in TV characters” “The Worst of the Harry Potter Movies” “The Worst of Bond” “Bond at 50” and more.

Finally, *I feel like I have to wrap up this post sooner or later* is the artist alley. Art is not something I’m good at. I’m much more of a logical type of person such as reading, loving and understanding science and doing sudokus for fun. Walking through Artist Alley and seeing how fandoms are represented in unique art pieces is pretty neat. The artists there are so talented and they put a lot of their time and effort into making it into this alley. Buying artwork at Convergence is supporting someone’s talent and business. Making art really gives people joy in their lives and for me to be able to support that hobby means a lot to me. I have random little art pieces that I bought from this con that I love. Including a purple Dalek (I know I need to stop with all of the Doctor Who references) and a really detailed Thor.

Convergence has a really special place in my heart and I can’t wait to go back this summer.