I have gotten busier as the semester goes on with lots of projects and quizzes coming up. Nevertheless I managed to find an hour downtime before I work this evening. Since I have been annually going to RiverQuest, I have been able to try two new games: Smash Up and Red7. I also added them on my Board Game Bucket List that’s pinned to the front of my blog. Feel free to check it out and recommend me some awesome tabletop games!

Smash Up is a game with decks of cards with a theme. To win the game, you earn 15 victory points. Minions are cards in your deck that allow you to rack up points to eventually earn victory points. Each deck has a particular theme that will impact the minions that are played. For example the first time I ever played this game my first two decks were spies and kitties. So the minion cards in that deck were cute kittens riding on rainbows and spies that referenced the James Bond film series. Of course I ended up picking these two decks because

So it makes sense that I played with these decks first. Overall, the two decks didn’t work out that well, but it still left me with a good experience with this game. 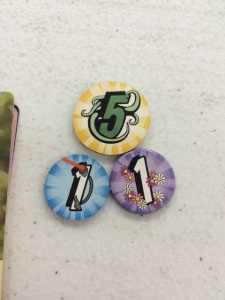 The next combination I worked with was the Princesses and Cthulhu. This combination actually worked out quite well and I would highly recommend it. Of course there’s a princess that’s similar to Elsa from Frozen. She actually has a lot of great abilities in the game, so she’s one of my favorite cards in the Princess deck. 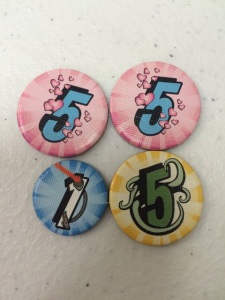 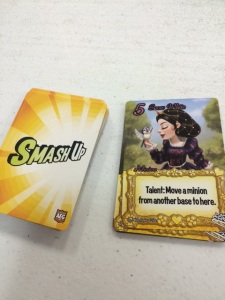 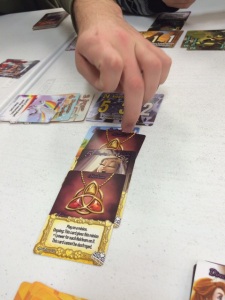 Generally this game is really easy to learn and is a pretty quick game to play. I highly recommend it if you love board games/card games that are really easy and make fun of pop culture a bit. Each expansion is great too especially Cthulhu and the mythic cards which I won’t go too in depth with this post. Smash Up is probably one of my all time favorite board games I have ever played! Play it immediately when you can!

Leave a Reply to Danielle @ From Girlie to Nerdy Cancel reply