Yesterday consisted of rock climbing and relaxing by binge watching TV shows. I finally finished the first season of Gotham. Will I watch a second season? Probably not.. this show was not what I expected and I mean it in the most negative way possible. 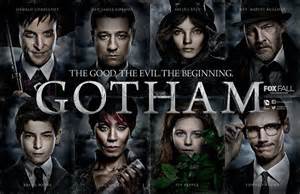 The season started off really interesting. The show is told from Jim Gordon’s perspective before he becomes commissioner. It serves as a prequel with Bruce Wayne still in middle school. The first episode of course is when Bruce’s parents are killed. Bruce wants to restore Gotham and remove all of the crime within Wayne enterprises. Jim Gordon is off fighting crime and even works for Arkham Asylum for one point in time. I actually really enjoy the part of the show where Jim and Harvey are out solving crimes. It feels like a dystopian Law & Order.

Jim is out trying to control the four crime mafia bosses. This includes Oswald Cobblepot, Fish Mooney, Falcone and Maroni. The four of them are fighting for control over Gotham. I actually don’t mind the Oswald Cobblepot portrayal. He does a good job of acting like the future penguin. I also liked the development of the Iceburg Lounge.

I also really like the portrayal of Edward Ngyma. The fact that they start him off in the Gotham City Police Department (GCPD) as a medical examiner is pretty accurate to me. We see Ed lose his sanity within the season finale. That’s one component of the show that really entices me into watching season 2.

However, there were so many things that I just could not stand about this show.

I cannot stand Barbara Gordon. She is Jim’s girlfriend and that’s okay. Then she becomes super depressed and starts sleeping with Renee Montoya on the GCPD. I think it’s cool that the show embraces bisexuality but, once Barbara sleeps with Renee, the story line is dropped. Then Barbara becomes very sad because her and Jim broke up. Towards the end of the season, she loses her sanity. I felt like her character was really thrown away. There was a lot the show could have done with her character and they lost that chance. What ever happened to putting strong female women in front of a television screen? Let’s not portray Barbara as a depressed woman over a breakup. Women are much stronger mentally and emotionally than that.

The joker has been introduced already in this season. I think that’s a mistake because by the time Bruce is grown, the joker should be thirty years older than him?

It’s really sad because I thought this show had a lot of potential.There were too many story lines and characters introduced with a bad story. I will definitely pass on watching season 2.

Also I completely agree with themarysue.com. They wrote a review about Gotham. I will post the link at the end of this blog post so definitely check it out.