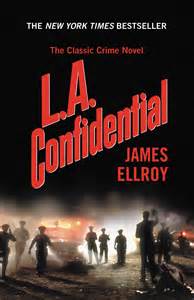 Summer is one of my favorite seasons because it allows me more time to read. I probably spent at least three hours reading yesterday to finish this book. L.A. Confidential is a book I picked up when I went bookstore hunting in Minneapolis. I finally got around to reading it. Unfortunately, this book was really disappointing. This is one instance where the movie is ten times better than the book.

L.A. Confidential takes place in the 1950s. The story revolves around police officers in the Los Angeles district. Ellroy introduces way too many characters to keep track of. However, the three main characters worth noting are Bud White, Jack Vincennes, and Edmund Exley. The three characters are all police officers in various districts within the police department. Bud White is working homicide and he purposefully goes after men who beat women. He goes against the rules and beats criminals who he feels deserve it. Jack Vincennes was working under narcotics and then gets transferred to Ad Vice which deals with pornography-type crimes. Finally, Edmund Exley is the “goody-two-shoes” cop. He follows every single protocol. He is essentially the opposite of Bud White. The novel revolves around the mystery of the “The Nite Owl” homicide. In 1953, various people were murdered at this nite owl coffee shop.

The problem with these characters is that I honestly dislike all of them. Bud White is violent and very sexist and disgusting towards women. He sees them as objects and calls women whores all the time. Now, that may just be the time period in which the novel takes place, but still, I really dislike Bud White as a character. Jack Vincennes is just a fame-hungry police officer. Edmund Exley is the good guy cop who only cares about making his way up in the police force. None of these characters are characters I appreciate.

The story itself is rather confusing. Ellroy introduces all of these different police officers and criminals and it’s really hard to keep track. If I would have known that before starting the book, I would have written down every single character and why they are related to the story.

Another problem I had with this book is how slow it was. My favorite part of the movie is when Exley and White team up to solve the crime and end the corruption in the police department. That doesn’t happen until the last 50 pages or so. All this build-up wasn’t even worth it because when everything was revealed about the nite owl, it took a while for me to fully understand what was going on.

I could probably keep going about how much I disliked this novel. If you love the 50’s time period, police corruption, and gangster activity, watch the movie version and skip the book. The movie is fantastic and it does a great job at cutting out the crap from the book.