Lately, I have been driving to my local comic book store somewhat regularly. Since my comics reading has increased, I have been reading comics faster than I can write reviews. I wanted to share the comics I read and my thoughts about them.

The Prometheite by Ari S. Mulch 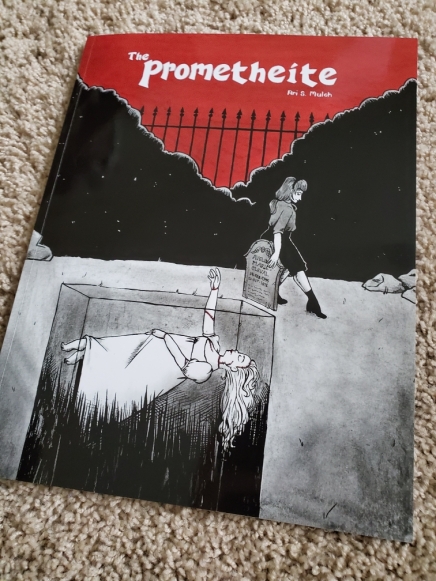 This graphic novel was one I helped back on kickstarter in June of this year. Ari is a LGBTQIA+ creator who launched this campaign during pride month. This novel is a lesbian retelling of Frankenstein. Frankenstein and gothic literature in general is one of my favorite genres to read. This novel captures the essence of the story. The artwork gives off a spooky vibe with the use of the black and white panels. The only other color used is red. The red is used sparsely, however when it’s utilized, it creates this horrific theme within the story. Ari Mulch can be found on tumblr and twitter. I rated this five stars on goodreads.

Finally, I get an idea as to what the hell is going on in this story. If anyone else reads Paper Girls, the first few trade paperbacks don’t go into why everything is happening, while this one gives more story background. Paper Girls stars four newspaper girls out delivering the newspaper in the 80’s. These girls witness an alien invasion of sorts which leads them to go time traveling. It’s been fun reading all the 80’s references. Recently, the girls travel to Y2K (2000). I was only six when Y2K happened, so there’s a lot I don’t remember. It’s fun reading about it in this graphic novel. Despite my earlier thoughts, I do recommend reading the series. The artwork is great and it’s clear Brian K. Vaughan has crafted an intricate story. I rated Paper Girls Volume #4 four stars on goodreads.

Ever since Riri Williams was announced to take over Ironman in 2016, I knew I needed to eventually read this. I have mentioned numerous times on my blog how diversity is incredibly important within any form of media. When Riri Williams was announced, I wrote a blog post all about it. I picked this first issue up in February during my Universal Trip on the Marvel Island side of the park. I loved Riri’s Ironheart suit. It’s a blend of pink with yellow on her shoulders. It’s feminine without being sexualizing. I highly recommend purchasing this comic. I rated this five stars on good reads.

During Small Business Saturday (November 30th) I picked up quite a few comics to read. There will be more comic reviews and I will probably write them in this format. Happy Comics Reading everyone!