When I attended Gen Con, I scored some exclusive goodies. In addition to being able to test board games from both Goliath Games and Games by Bicycle, I was also given a couple freebie items to take home with me. One of these items was an exclusive at Goliath Game’s booth. This item was a GlowBot specifically a Robin GlowBot. GlowBot’s are a line of figures created by Goliath that have glowing beads. These beads when plugged into their character, allow the character to light up in the dark. I was given the Robin version, which was the Gen Con exclusive. It reminds me of a Funko, light-up, collectible figure. After putting it together last weekend, I’m excited to share with you all about this GlowBot. 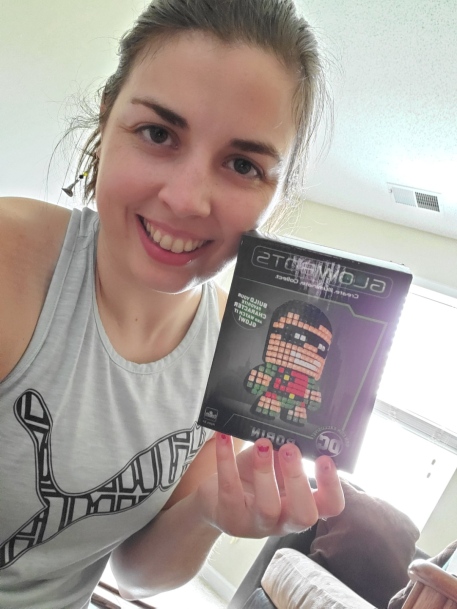 Time to put my GlowBot together.

Even though I received the Robin GlowBot a month ago, I waited to put it together because me and the fiance were moving into our new two bedroom apartment. I didn’t want to put it together only to take it apart for packing. When I first opened the box, I saw there were the beads packaged in a plastic baggie, along with the cord to plug the GlowBot into the wall. There’s also a sheet which demonstrates which color beads goes in which hole. It took me about forty five minutes to put all the beads in the correct places. Mainly the reason why it took me a while to put this GlowBot together was because my kitty kept stealing the beads from me because she’s naughty. 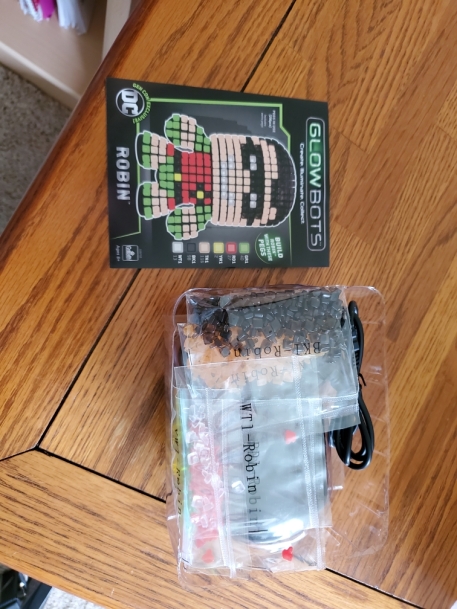 Contents within the GlowBot package.

After putting Robin together, I was impressed by the appearance of Robin when he lights up. Usually I’m skeptical about figures like this because when put together, they often don’t look like the character they’re supposed to be. However, I was happily surprised to see Robin glowing and actually looking like Robin.

Look at how happy he is!

These GlowBots are adorable. They’re perfect to act as a night light or it would work great as a desk accessory at work. Besides Robin, they had Wonder Woman, Batman, Superman, Joker and Harley Quinn. Robin is one of my favorite DC characters, so I’m thrilled to have his figure plugged in our bedroom. Thanks to Goliath Games for allowing me to take one home, it helped make my Gen Con experience memorable.