This weekend I stayed at home playing video games and watching shows on Amazon Prime. For the past month or so, I had been gone almost every single weekend and the introvert in me just needed a recharge. The timing is perfect because I had pre-ordered the new Spiderman game for PS4 made by Insomniac games. I had never been more excited for a video game release in my life. I had seen E3 footage of the game and the way Spiderman flew around NYC was breathtaking. I wanted to share my first impressions of the game since I’m a couple hours in. I will not be providing spoilers for the story, but if you are someone who wants to play the game without any knowledge about it, this blog post may not be for you.

One of my first impressions with the new Spiderman game is the graphics. The city of NYC looks amazing and after visiting NYC a month ago, this game allows me to explore the “Big Apple” again. Spiderman effortlessly glides through NYC allowing for him to travel to each neighborhood quickly. It takes getting used to swinging around the city, but after playing for a couple hours it becomes easier.

This game is detailed specifically with Spiderman’s suits. There are numerous suits to unlock including his suit in Secret Wars, the wrestling suit and so many more. With each suit, I can craft mods to the suit which provide benefits for combat. One suit allows Spiderman to build focus faster so he can heal quicker while another suit protects him  from melee attacks. Besides suits, the game provides plenty of detail with their collectibles. One of my favorite collectible item so far is to collect Spiderman’s backpacks which contain clothes and other memorable items he has stashed with his webbing across the city. I won’t list what any of these items are, but they tell his story whether that’s growing up in high school, memorabilia from fighting villains and Spiderman merchandise. It’s been fun to collect the backpacks and hear Peter’s explanation on what they mean. As a Marvel fan, this adds to the experience of the game. 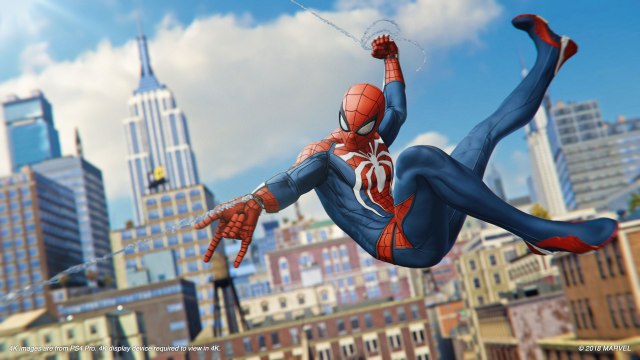 This post is only meant to list my first impressions of the game, so I don’t want to go into too much detail. Honestly, I’m loving every single minute of this game! Spiderman deserves a great video game and I feel this is it. If you haven’t purchased the Spiderman game and you have a PS4, you’re truly missing out on the ultimate comic book / video game experience.