My comic to be read pile is ginormous! Last weekend I went to a convention where I bought numerous comics and graphic novels and today I went shopping and picked up DC’s Rebirth: Red Hood & the Outlaws Vol. 1 because I’m considering a female Red Hood cosplay in the future. In recent days I have finished a couple of series and I wanted to share one gigantic post with all the comics I read because I’m too lazy to write reviews on each series.

Also I won’t be going over the synopsis of each series or comic I write about. These are just my first reactions. If you head over to my goodreads page, it shows what I read and that’s where you can read about each of these series in detail. Otherwise google is a good source as well 🙂

Saga Volume #1: Saga was the comic book series that everyone couldn’t stop talking about. I felt like I was out of the loop so I purchased the first volume and overall it was decent. Lying cat is a majestic pet and I want one of my own because wouldn’t that make life easier? Having a creature by your side that detects dishonesty. . .  I think so. The relationship of the two main characters is told extremely well along and I like how each separate story line intertwines all the characters together. I will practically buy anything Image Comics puts out including this, too bad I was late to the party. (4 stars on goodreads).

Nailbiter Volume #2:  Nailbiter Volume #1 was my favorite series I read last year so I had extremely high hopes. Sadly, I felt a little let down. I felt like I read the trade paperback and nothing really happened. It seemed a lot of the stories were more filler information about the town than anything else. However, the ending did leave me wanting to keep reading on to the third volume so I’m hoping this is just a slump in the series. (3 stars on goodreads).

Superman Red Son: This graphic novel presents an interesting dilemma; what if Superman crash landed in Russia versus the United States? Obviously Superman would still fight for his country and his people, but now it’s on the side of communism versus capitalism. I liked how each of the DC characters were brought into the story including Batman as an anarchist to Superman’s reign. This was an interesting read, but not my favorite title I read this year, but if you’re a DC fan particularly of Superman, this is for you. My boyfriend loves Superman and probably enjoyed this more than I did. (3 stars on goodreads). 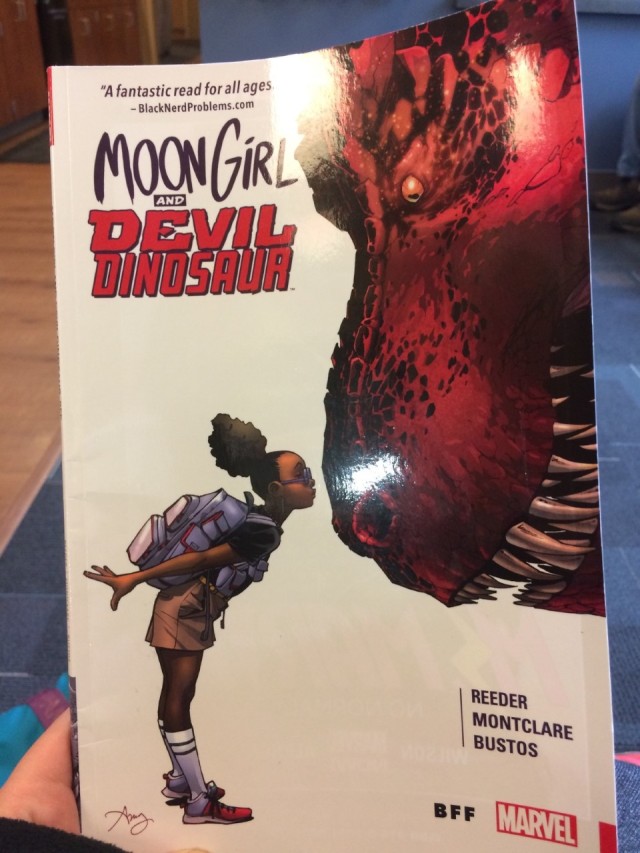 Moon Girl & Devil Dinosaur Volume #1. Three quick words to sum up Moon Girl & Devil Dinosaur would be: adorable, heartwarming and charming. Moon Girl and Devil Dinosaur establish this strong relationship right off the bat and seeing Devil Dinosaur’s facial expressions makes me laugh and feel sorry for him at times.. I promise nothing happens to the dinosaur, but you shall see when you buy this because you need to purchase this ASAP. Moon Girl is also a great comic to introduce to younger girls so I seriously want to save this for my future daughter I may/may not have. (5 stars on goodreads, go buy this right now.)

Snotgirl #1: I was unsure of this series so I only purchased the first comic. This comic like Saga, had really good reviews so when I was browsing my comic book store on Free Comic Book Day, I bought it for a dollar so I could try the series out. I thought it was okay, but it wasn’t as good as I wanted it to be. I eventually will read the first trade paperback, but not for a while.

Phew, now I don’t have to write 6-7 separate posts since I crammed this into one. Let me know in the comments what comics you have been obsessing over lately and if you don’t follow me on goodreads, you should >>>> Bizarre Brunette’s Bookshelves!