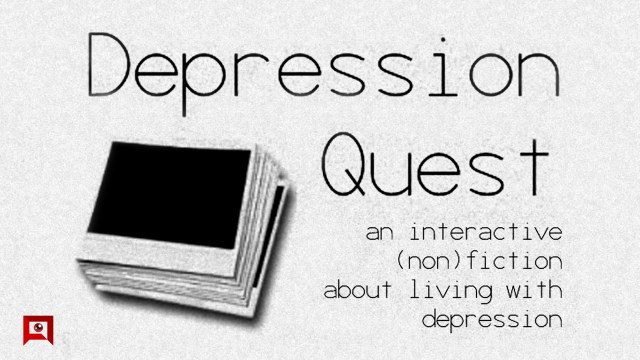 I have never been diagnosed with a mental illness. I have no idea what it’s like to feel a lack of motivation to get out of bed due to depression or to get a crippling panic attack over something minuscule. Therefore, I don’t often talk about mental illness on this blog. Last weekend while randomly surfing through Wikipedia pages did I come across the game designer; Zoe Quinn. They created a simple point and click game about what it’s like living with depression titled Depression Quest. Completing Depression Quest helped me gain insight on what it’s like battling with this illness.

The game has an opening page detailing a trigger warning because the content in the game is heavy. The National Suicide Prevention Lifeline URL is also located towards the top of the page. As you may infer, Depression Quest is not a happy game. The unnamed main character begins with a feeling of being “inwardly angry towards feeling lazy”. Additionally the character has a job, a partner named Alex and a loving family. As you click through the game, different experiences will shape the character and how they react to changes in their life. 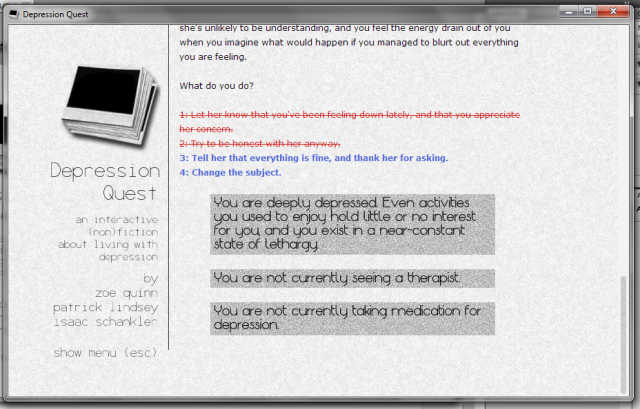 Again, I have never been diagnosed with depression, so I usually become informed about mental illnesses through the stories of others. This game didn’t teach me anything new about what it’s like to have depression, but I feel more empathy towards mental illnesses. I used to be ignorant when it came to mental illnesses because when I was growing up and going to school, depression wasn’t talked about. I think our society has become more open with mental illnesses, but I think that we could reduce the stigma that exists surrounding mental illnesses.

This game goes by quick and I recommend checking it out if you haven’t. Mental illnesses can be debilitating, but the more we understand them, the better we can act as a support system to those who have been diagnosed. Video games can be a teaching medium for important issues and thanks to Zoe Quinn for their strength in telling a shorter version of their daily battles with the disease.