Science is the subject in school I struggle with, but enjoy the most. My major is heavily focused on biology, anatomy and physiology which are the branches of biology that comprehend how the body works. The Science Museum of Minnesota is a place filled with childhood memories of IMAX movies and featured exhibits. I was personally invited to interact with the newest exhibit Sportsology; the science behind sports medicine and biology.

A couple weeks ago, a fellow geek who reads my fit geek articles for Twin Cities Geek contacted me. She also is the coordinator for programs held at the Science Museum. She thought I would love to write an article on Sportsology since I write for the Fit Geek section of the site. I also got in for free and could bring the boyfriend who has never been to the museum before. Saturday January 7th was filled with vertical jumping, balance activities and racing against a T-REX… 😀

Sportsology at the MN Science Museum

Wait racing against a T-REX? Yep! There was one sprinting activity where you could select your favorite athlete and sprint alongside them to see how fast you are. Instead of choosing an athlete, I chose a T-Rex. A T-Rex by the way runs at 20 mph. So I attempted my sprint, but failed miserably against a virtual dinosaur.

A less exciting, but still entertaining activity was on balance. Interestingly enough this picture was an activity to show how your ears help you balance. My boyfriend walked to that circle shown above. He then spun around in circles for five rotations. Once he’s all dizzy, he will attempt to walk in a straight line following the left orange line. At this point your body isn’t helping you balance because your brain is trying to send nerve signals to your muscles. Your vision isn’t helping you balance because you’re dizzy. The fluid in your ears is what will help you walk in a straight line. Cool huh? 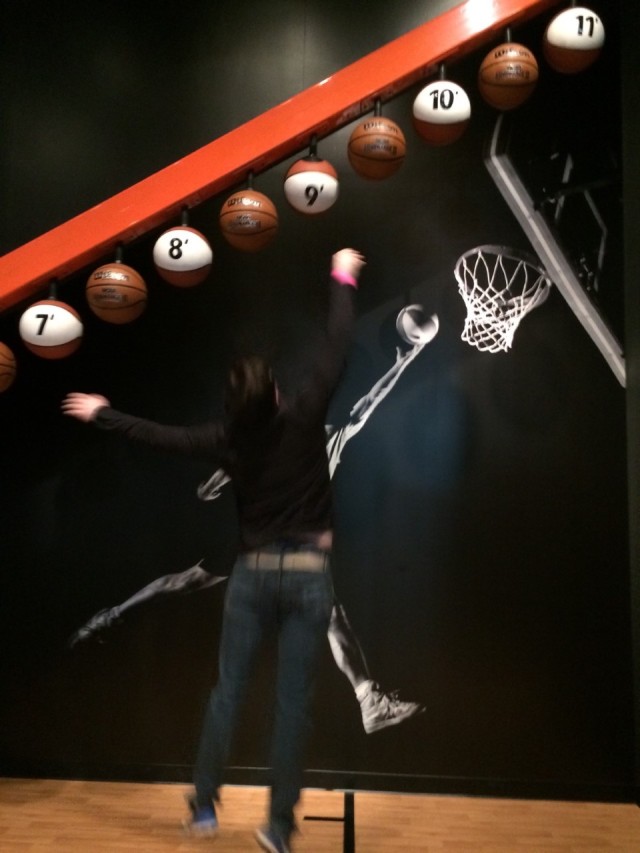 This activity is a vertical jump test. Different basketballs were hung from different heights and you could jump to touch them. I was only able to jump to 8.5 inches while the boyfriend could jump to the 9 inch basketball.

This exhibit made for a fun Saturday. If you’re from Minnesota, I recommend taking a visit to the museum. If you’re located in the other 49 states. . . you’re missing out.

2 thoughts on “Athletic Abilities; Exhibit at the Science Museum”