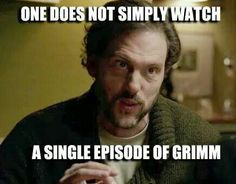 Fun fact, I’m not a huge fairy tale person. Sure, I loved the Lion King and The Little Mermaid when I was younger, but I wouldn’t consider Disney a huge fandom of mine. As I finish Crazy Ex-Girlfriend on netflix, I had some extra time to devote to watching more TV. My friend couldn’t stop obsessing over Grimm and she wanted someone to chat with. I figured, why not? Though if fairy tales aren’t exactly my thing, would I even like this show to begin with? After finishing season #1 yesterday, I wish that I had given Grimm a viewing earlier.

Grimm is set in the beautiful city of Portland, Oregon. I have never been to Portland or Oregon, but this show makes it seem like this would be a fun place to live. Being able to camp constantly in the serene forest or having a hot cup of coffee at a quirky coffee shop is very appealing to me. Portland is on my bucket list of travel destinations all thanks to Grimm.

I digress. Grimm starts with introducing Nick Burkhardt and his girlfriend Juliette. Mary, Nick’s aunt, arrives in town randomly and describes to Nick that his ancestors were Grimms who fought various monsters. Nick can see monsters phase from humans into their other species which is incredibly freaky. When this ability arises, Nick meets Monroe, a vegetarian blutbad/werewolf. Throughout Nick’s experiences, Nick and Monroe grow closer as Monroe helps Nick understand his heritage. The show’s drama comes from Nick’s split duties as a cop and a Grimm while also hiding this secret from the force and Juliette. Maintaining a friendship with a werewolf is also dramatic.

What I truly love about Grimm is the realistic aspect of story telling. Fairy Tales are actually very dark stories and I like that Grimm doesn’t skip the gruesome elements. These creatures that exist in Nick’s world are beings that deserve to be feared. In season #1 I came across: gargoyles, dragon related fire beings and sadistic spiders. Also just wait until you watch the Cinderella themed episode. . .

Finally, Nick and Monroe’s bromance is adorable. I love their friendship so much! Monroe is intelligent, patient and the caring person that Nick needs to guide him through all of this lore. Nick also compliments Monroe because he utilizes his help, but also uses his knowledge to protect Monroe from the blutbad’s enemies.

As far as spoilers go, I have only seen season #1 so please do not give me spoilers! 🙂 Give me two weeks though and I should have most of the seasons viewed. This show is addicting so if I neglect this blog, it’s because I’m fantasizing about living in Portland and being a Grimm.

6 thoughts on “Grimm; dabbling into the classic fairy tales”