My beautiful wood bookshelf is being filled with various comic books. I went through a shopping spree in the summer when I bought four titles at a time. Now I have major catching up to do and I’m not complaining about it. Comics are still so fascinating to me because the artwork on each page is something I admire, since I’m not artistic whatsoever. Recently, I finished Zodiac Starforce which I have obnoxiously mentioned in multiple blog posts. Finally, I am writing my review and let me tell you, it’s probably my favorite graphic novel I have read this year. 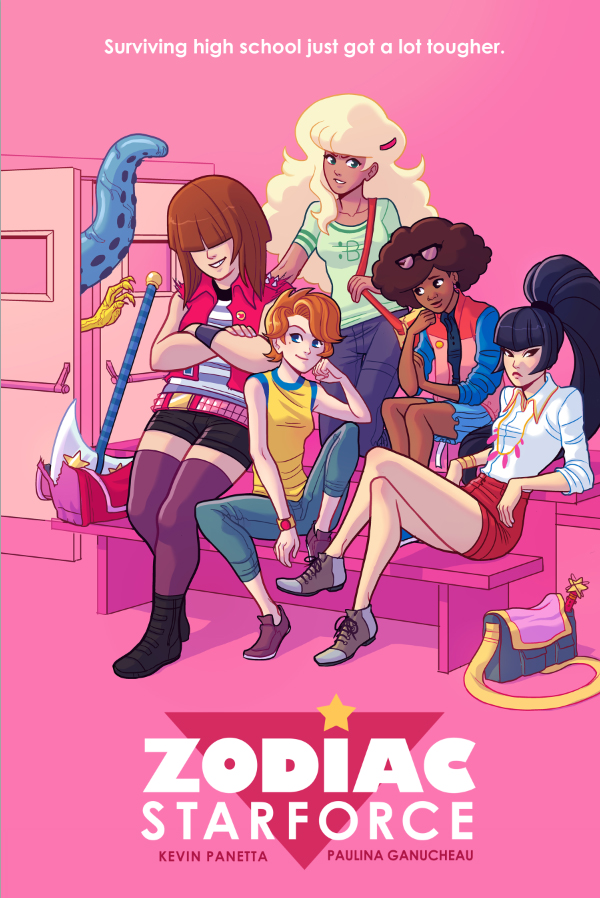 Zodiac Starforce stars four girls who are united to stop evil, defend the earth and complete high school without angering the mean clique. They’re given magical powers by Astra and they use these powers for good. Emma the leader, is infected by a monster from another dimension. Molly, Kim and Savannah unite together to help the befallen Emma and to cure her infection. While also saving the world of course.

The amount of similarity to Sailor Moon is unquestionable. I started getting into the Sailor Moon fandom after I cos-played Sailor Saturn. What makes Sailor Moon and Zodiac Starforce so appealing is that all of the characters are female and they’re kicking ass and saving the planet. The cast of the Starforce go into battle in realistic outfits that are also surprisingly cute. Molly is probably my favorite out of the bunch because I’m envious of her high pony tail. Unfortunately though, Zodiac Starforce doesn’t contain talking cats.

My favorite part about this story is that there is a healthy lesbian relationship. How cool is that!? Representation is crucial because not every comic book character has to be white, cis and straight. So seeing those two just made my heart skip a beat; they’re adorable together.

Besides being completely entranced with this story, there’s a sneak peek at the end. It introduces potential new members one representing Leo which is my sign. I’m hoping that the next issue will also discuss in detail of Astra and how the girls were given the powers in the first place.

Zodiac Star Force is a great story filled with plenty of bright pink pages and kick ass battles. I wish I had Savannah’s bright blue spear, but alas I was not granted with magical powers. Darn. I guess I’ll have to settle with reading about it and impatiently waiting for the next issue to come out.