Since attending Gen Con in August, I have been receiving emails from various game publishers. One email I received was from Kosmos about their new board game releases. After emailing with Kosmos, they have nicely agreed to send me a couple of the games peaking my interest. The games I was most looking forward to playing include: Adventure Games: Monochrome Inc, Roll for Adventure and Exit: the Catacombs of Horror. 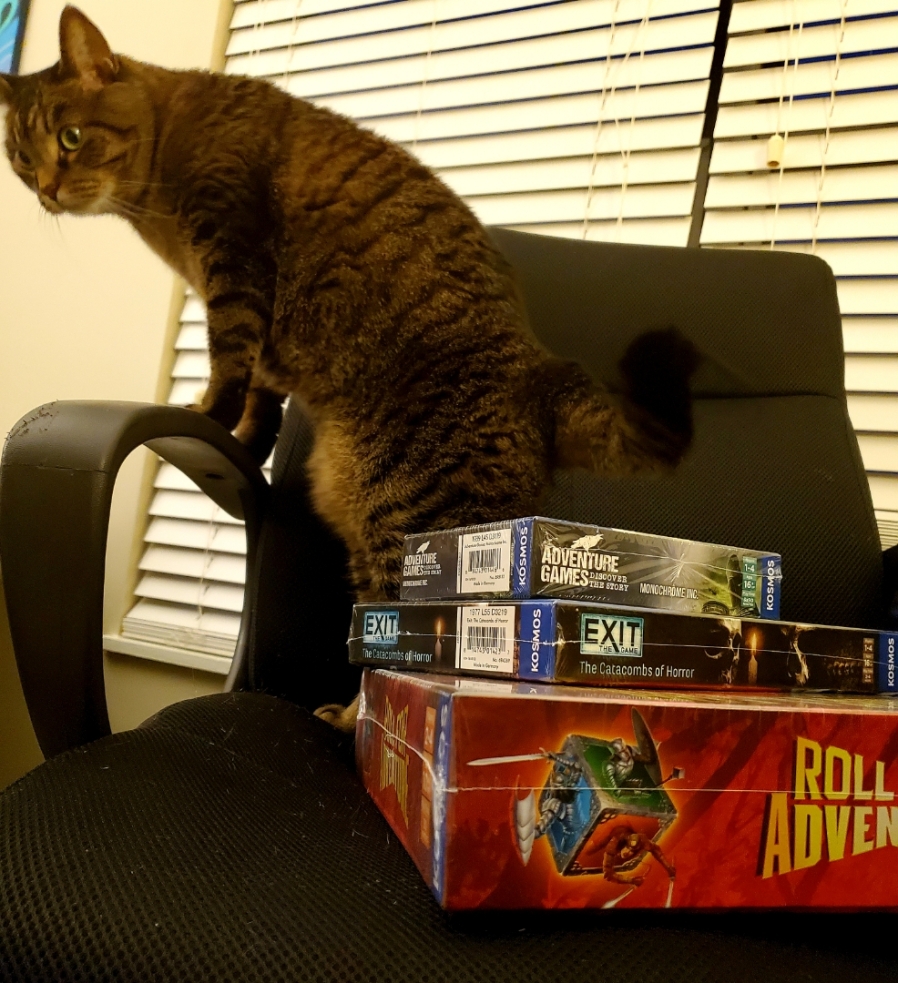 Athena loves board game hauls especially if she can play with the dice. Photo taken by Me.

Before I unveil the games, I wanted to give background information about Kosmos. Technically titled Thames & Kosmos, this company was originally founded in 2001 specializing in improving science education for all ages. In college, I taught science to elementary school kids as volunteer work and to see kids excited about science made me happy. Thames & Kosmos has moved into board games to teach kids social skills and stimulates logical and strategic thinking. Despite their intentions, these games are for adults as well, but can be introduced to kids with parental approval. 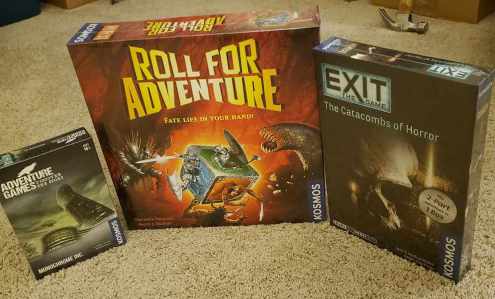 My game haul cortesy of Kosmos. Photo taken by Me.

The first game I asked for was Adventure Games: Monochrome Inc. This game puts players in the headquarters of Monochrome Inc., a biotech company with hidden secrets to be uncovered. Players have to escape Monochrome by working together and searching for clues. The appeal of the game is the rules are simple to learn. This would be the perfect game to bring to a brewery with friends. There’s also three endings to discover, which increases the likelihood I would replay this game. Market value of Adventure Games: Monochrome Inc. is $20 and can be purchased from the Kosmos website.

The second game is Roll for Adventure. This game is a dice-rolling, cooperative game. Players have to stop the Dark Lord from spreading darkness across the land. Players can either save the empire or allow the empire to succumb to the Dark Lord. This game reminds me of a DnD inspired adventure. This would be perfect for a tired DM who needs a break from writing a session for players. Market value of Roll for Adventure is $35 and can be purchased from the Kosmos website.

“Mom, what’s this????” Athena says as she examines the games. Photo taken by Me.

The final game I picked was Exit: The Catacombs of Horror. Kosmos has a new line of board games titled “Exit Games” which are inspired by escape rooms. Each “Exit” game has a different story which allow for players to experience a different adventure. This game takes place in Paris in the catacombs underneath the city. After the disappearance of a friend, players make their way down into the underground labyrinth. This game is rated as a difficulty of 3.5 / 5. I haven’t had a chance to play this game yet, but I’m intrigued as to how challenging I will find it to be. Market value of Exit: The Catacombs of Horror is $25 and can be purchased from the Kosmos website.

That’s the end of my Kosmos game haul! I want to thank Kosmos for sending me these games in the first place. Every game they had sounded fascinating, but these three stuck out to me. I would highly recommend pursuing Kosmos website. Kosmos can be found through their website and on Facebook, Twitter and Instagram.