When I got my Harry Potter tattoo at Jackalope Tattoo, I had my best friend from college drive up and stay with me for the weekend. It was helpful having her with me because not only does she have several tattoos, but she allowed me to hold her hand if I needed it. Before I went to get my tattoo, we had a board game night on Sunday. She pulled out her copy of Scythe and we decided to give it a go. I didn’t think I would like this game as it was explained to me as a mixture of Settlers of Catan and Risk. However, once I was able to comprehend the rules, I would definitely play Scythe again. 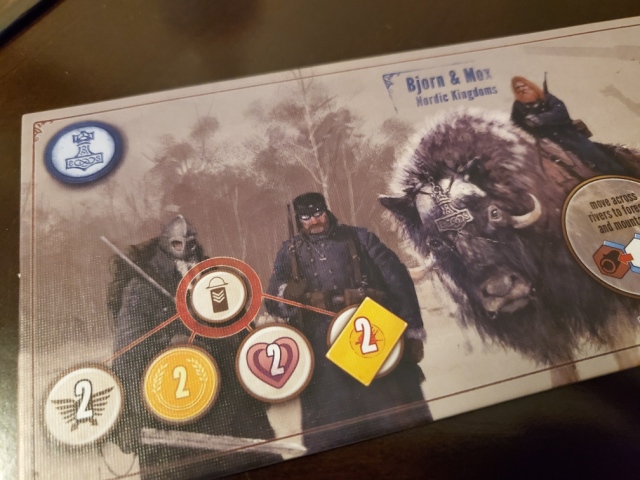 Scythe is an alternative 1920’s engine building game where players will expand their group by farming, building factories and possibly colonizing. I picked Bjorn & Mox because it was the most “Minnesotan” group to pick from. As a side note look at my cute Buffalo (is it a Bison?? Not sure). Bjorn’s special ability is being able to cross rivers. I was able to utilize this ability to access a special reaction token. To win a game of Scythe, it’s all about how many points a player accumulates in the game. One reason I was able to get most of my points is because of my popularity. Popularity is underrated and since I didn’t colonize and was nice to people, I gained more points at the end of the game. If I play another game, I would emphasize being popular makes a difference in being able to win.

When I first played the game and my friend was explaining all the rules to me, I was lost. There’s a lot to keep track of as far as turn selection and what resources produce which type of colony. It wasn’t until half way through the game where I finally understood what I was doing with Bjorn. Bjorn didn’t earn me a win, but I feel if I were to use his Buffalo again, I’d be able to gain dominance in Scythe’s alternative 1920’s universe.

Scythe is one of the many board games funded on kickstarter which led to it’s release in August of 2016. Stonemaier Games is based in St. Louis, MO and specializes in creating memorable board games which specialize in entrepreneurial mechanics. Scythe is the only game I have played from Stonemaier Games, but since Scythe’s release, there have been expansions released for the base game. One apparently includes hot air balloons, which I haven’t played, but my friend did. She said she liked the concept, but was confused by how it worked.

Playing Scythe was a fun experience. I don’t think I will personally purchase my own copy of Scythe because I have two friends who own the base game. Usually I’m not a fan of entrepreneurial type games, but I would make an exception to play Scythe.