This past weekend, I attended Gen Con for the first time. Gen Con is a four day gaming convention located in downtown Indianapolis. This convention encompasses several facets of gaming including: board games, PC gaming, trading card games, RPG’s, LARP (Live Action Role Play) and more. Detailing my experience attending Gen Con is more difficult than I imagined. It’s challenging to put into words how much this convention meant to me as a gaming geek. I’m starting to get teary eyed as I type this post because I had such a fantastic time gaming for four days straight. For those who are looking to attend Gen Con, I would highly recommend it.

My journey to Gen Con started in February of this year. I applied for a press badge on a whim because why not? I was approved for a press badge for C2E2 in Chicago, so why not try it for Gen Con. My press badge was approved within a couple of weeks after I submitted my first application. Within a month before the convention, my email was flooded with board game developers wanting to set up a time for demos and interviews. I settled on two demo’s with Goliath Games and Games by Bicycle. To prevent this post from being incredibly long, I’m going to write a separate post on the games I did “demo” from both of these developers.

After realizing I was actually going to Gen Con, I recruited my brother to come with me. I was already planning on driving down to Indianapolis, but I didn’t want to go by myself. Having my brother with me throughout the drive made it more bearable. We listened to Not Another DnD Podcast as we drove to get us hyped up for the convention. 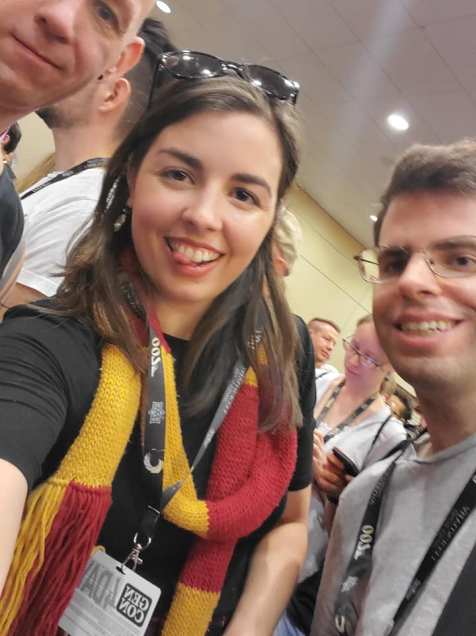 My friend, Me and My Brother waiting to go into the Vendor Hall at Gen Con 2019.

Me and my brother chose to stay in an Air BnB versus a hotel downtown. Part of this decision resulted because I couldn’t find any hotel on Gen Con’s website with a room available. As soon as passes go on sale in January, hotel rooms are reserved as well. This meant by the time I was looking for a room, I was coming up with nothing. Our Air BnB was about 25-30 minutes away from Downtown Indianapolis. One of my regrets was not staying right in the heart of downtown. I wanted the full Gen Con experience, but I felt that was stunted because of knowing we needed to take a Lyft every single day. We also had to bring almost everything we needed for the full day because we didn’t have anywhere to store our stuff. This didn’t take away from the convention, but it made me realize what I want to do for next year’s convention.

LOOK AT THIS CROWD! Waiting to enter the vendor hall.

When I first approached the Indianapolis Convention Center on Thursday, I was in awe of how big the vendor hall is. There are 30 ROWS OF GAMES. 30 ROWS!? I was overwhelmed. How could I look at all the games where there are that many developers who appear at Gen Con? It wasn’t until after the third day of attending that I felt I had seen every vendor. I brought $300 of spending cash with me and even though it was enough cash for me, I could have easily saved more. 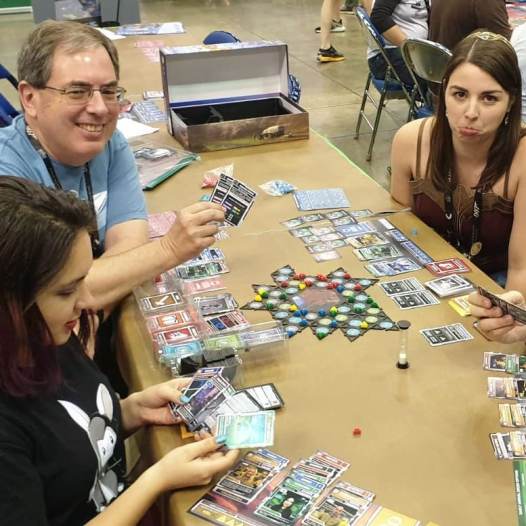 As far as the gaming, it’s extremely organized. On the Gen Con website, I signed up for a couple gaming demo’s before the convention began. However, I discovered I could also buy generic gaming tickets if I found a game I wanted to demo, but didn’t have it in my schedule. I demoed an intergalactic strategy game titled Lander which doesn’t launch on Kickstarter until March of 2020. Again, to prevent this post from being gigantic, I will write a separate post of my game testing of Lander. I do plan on “kicking” the game once it launches because I enjoyed the strategy of what the game had to offer.

Another reason I loved being at Gen Con was I felt I was at the center of board game news. As I mentioned in the previous paragraph, I played Lander which hasn’t even been released yet. It felt like I was getting a “sneak peak” of a game that hasn’t launched.

To end my post, I wanted to sum up the turn out of Gen Con 2019. Gen Con had a record breaking year with 70,000 attendees. There were 19,600 ticketed gaming events, over 2,000 of these tickets were electronic tickets found on the Gen Con app. Finally, Gen Con took measures to cut down on waste that the convention produces. For their efforts, they prevented 24,000 cups from ending up in Indiana’s landfills. 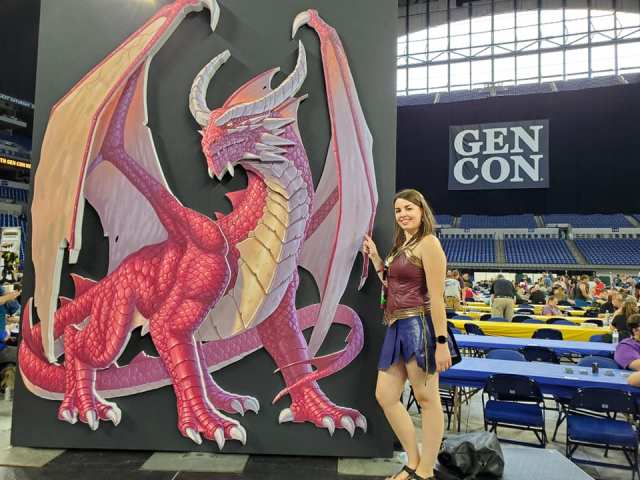 Gen Con was a life changing experience for me. I never felt more proud to be a gamer and to be in a place where I fit in. This convention is one I hope to attend again in 2020. Hopefully I will see some of you there 😉

6 thoughts on “Gaming at Gen Con”