This August I will be attending Gen Con for the first time with a press badge! Instead of attending under Bizarre Brunette, I will be attending on behalf of Twin Cities Geek. As a board game and DnD player, I cannot wait to see what Gen Con has to offer. I have already started putting money aside to spend at the con because I want to purchase all the board games. This will be the first road trip me and my brother take together because I invited him to attend Gen Con this year. I’m already counting down the days until Gen Con begins.

My Gen Con Profile! Screenshot taken by me.

The road to attending Gen Con began in January 2019. I have a friend from college who used to own a game store. He has been attending every Gen Con for years. I had always wanted to go, but being in college made that extremely difficult to afford. He reached out to me inquiring about whether I would want to go this year. For shits and giggles, I decided to fill out a press badge with full intention of paying full price for a badge in case it didn’t work. In February, I received confirmation from Gen Con that I would be receiving a press badge. I was elated and immediately began to research where me and my brother would lodge for the convention. 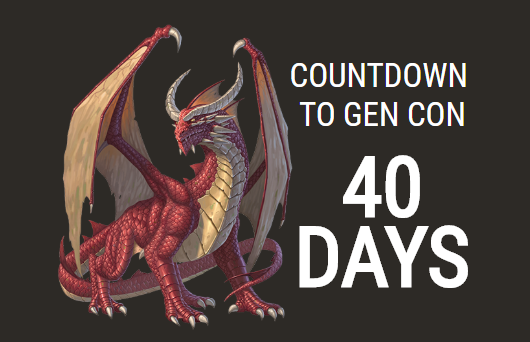 It’s the final countdown. Image screenshot taken by me.

Speaking of hotels, I started looking way too late for a hotel room. Hotel rooms usually sell out when Gen Con badges go on sale in January. Virtually every hotel I had checked was full. This is where I decided to look for air BnB’s. I found an affordable air BnB northeast of downtown Indianapolis. I’m slightly worried that it’s a little too far from the convention center, but that’s what uber is for. My lesson was learned if I want to attend Gen Con and have a hotel downtown, I need to book it in January.

Last month, the event lists were released. These include various DnD campaigns, MTG 2020 Core Drafts and even a group fitness class titled Buff Barbarian. You better believe I signed up for the Buff Barbarian because that’s the best name for a group fitness class I have ever seen. Besides the Buff Barbarian, I also put down a couple DnD campaigns I wanted to be apart of. However, when I clicked register for events, I was in 6,119 in the queue line. 6119!!!!! It was safe to say I didn’t get many of the events I pre-registered for, however, I am playing in a Harry Potter themed board game, so that’s a win for me. I also didn’t realize events were paid. Each event costs anywhere between $2-$12 dollars. I wonder if that’s to pay for the DM hosting the event? I’m not quite sure. This certainly limited the events I wanted to do because of a cost per each event.

As far as cosplays, I haven’t quite established which cosplays I will bring. I’m thinking for sure my viking Wonder Woman inspired cosplay along with a Harry Potter Gryffindor student cosplay. I’m not sure how many people cosplay at Gen Con or if it’s more of a gaming convention meaning less people cosplay. No matter what I will wear a cosplay because cosplaying is fun.

I cannot believe I’m attending Gen Con as press this year. This is an amazing achievement for me and I hope to spread word about Bizarre Brunette while I’m there as well. If you’re going to Gen Con as well, I’d love to meet up! Let me know in the comments below.