C2E2 is a convention I had been admiring for a while, but the timing was never quite right to attend. I was lucky enough to acquire a “press” badge this year, so I could attend the convention for free. Reflecting on my C2E2 experience, I wanted to publish my own Do’s and Don’ts list more specific to C2E2.

Do Watch What You Drink 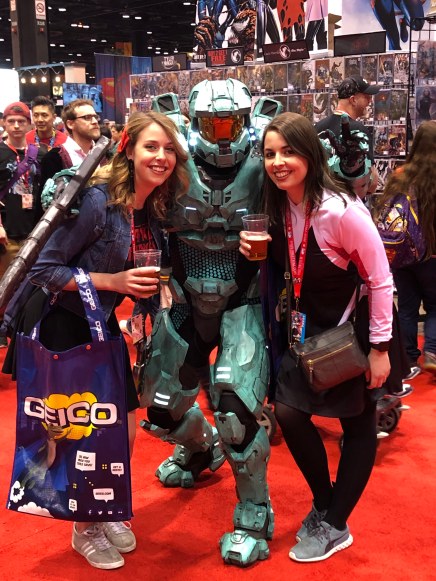 Did someone say… beer?

I’m a beer drinker and immediately after I entered the convention, I had a beer at Revolution Brewing. I was quickly two beers in and my mouth was dry. My poor friend felt hungover the next day because we were consumed with drinking beer and walking the floor. Drink your water!! Especially in between drinks. This convention floor was a lot bigger than what I had ever experienced and I was more dehydrated than I should have been.

Don’t Stay Far Away from the Convention

One of my college friends lives about 50 minutes outside of Chicago and in my mind, I thought this was perfect. Me and my friend could save on hotel costs by staying with her. Shout out to my friend for hosting us, you rock. However, I found quickly this was a mistake. It took us between 1-2 hours to get to the convention each day due to using public transportation. The public transportation was easy to figure out, but time consuming. I wish we would have been able to get downtown quicker. If I do choose to attend C2E2 next year, I will plan on getting an airBnB or stay at the hotel nearby.

Do Scout out Vendors Ahead of Time

I briefly scanned the list of vendors before I drove to Chicago, but I was surprised by the amount of vendors who made the trek to C2E2. One vendor I was super excited to see was Flex Comics. I wish I would have known their presence beforehand because I would have budgeted the cost of one of their workout tank tops.

Spider Gwen is ready for action!

Don’t Apply for a Press Badge

Hear me out on this one. I applied for a press badge not only for the “free” badge, but also to write during the convention. I regretted this. It made C2E2 less of a fun trip, but more work. I had to come up with blog post ideas for Twin Cities Geek and Bizarre Brunette. I would have preferred to be able to wander around on my own time without this writing cloud over my head. I personally wouldn’t apply for a press badge to C2E2 next year and instead attend as a comics fan.

C2E2 is easily one of my favorite comic conventions I have ever attended. It was incredibly organized and I liked the red carpet on the floor. It was great for photo ops with cosplayers. I deeply enjoyed the amount of artists, vendors and bigger companies who appeared at the convention. I wish I had more money to spend at the con, but due to my prior trip to Orlando, I had to save money. Attending C2E2 has become one of my favorite memories of 2019.