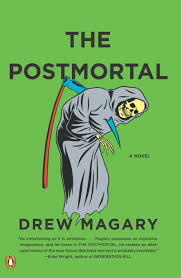 Right now I’m living my young 20’s in a city where I belong. I don’t get excited about my birthday anymore, but I don’t dread getting older. In a recent book I read titled the Post Mortal by Drew Magary, there was a cure to aging discovered and almost everyone in this book received the cure. They would stay the same age and their organs wouldn’t deteriorate. The planet Earth changes as people are living way longer than they used to. So the real question is, if the cure existed where you wouldn’t age any longer, would you take it?

Personally, I wouldn’t want to receive the cure for aging. I try and take care of my body so that as I age I’m able to use it for longer. In the book, the government eventually goes to extreme measures by sanctioning the killing of elderly people. There’s also a lot more divorce because people enter into what’s called a cycle marriage. Cycle marriages are contracts where each person says they want to be together for 40 years and then divorce to find someone else to marry. I would like to think the person I end up with will be by my side forever, not just as a placement holder.

For the record, I actually really disliked the book for multiple reasons including John Farrell the main character being an asshole and the book moved way too slow for me. I will say I did like some of the themes the book presented as to whether or not we deserve the right to live forever. I look at Wolverine as another good example of this. He has lived through decades, but he isn’t happy because he has seen everyone he cares about perish while he has to suffer through his life. That’s not a life worth living.

Even though I didn’t like this book, it allowed me to be able to read something that I normally wouldn’t have. Let me know in the comments whether you would receive the cure to aging if it ever became available.

5 thoughts on “Would you get The Cure?”