I have been having a fantastic day. I got off of work 2 hours early, cleaned the kitchen and reviewed my health goals with my personal trainer / coach. With the new available free time, I wanted to check into my good reads account and see how I’m doing with my 2018 reading challenge. I have been reading so many books & comics that I haven’t been able to post reviews as quickly as I have been reading, which is a good thing. This post is more to sum up what I read that I hadn’t had a chance to review on this blog yet.

Good as Gone by by Amy Gentry

This is Amy’s first debut novel and I believe I found this book through a random Barnes & Noble shopping trip. I included the trigger warning because there are some graphic scenes in this book that made me a little sick to my stomach.

Eight years ago, Julie was kidnapped out of her bedroom in Houston, Texas. On a random summer day her mother, Anna answers the door and sees an older Julie on her doorstep. Anna is overjoyed by the return of her daughter however, Anna starts to doubt Julie’s story. Out of the blue, a private investigator contacts Anna about his suspicions with Julie’s kidnapping. Julie’s story unravels and the reader is left to grapple with whether or not Julie is actually Julie and if she’s an imposter, what does she want with Anna?

I’m not going to spoil the book, but my major complaint was how the story was told. “Julie’s” story is told backwards while Anna’s story is told moving forward. It made the story confusing and I felt I had to read back into the book to remember Julie’s story. I felt the book kept me on the edge of my seat without really knowing what would happen. I ended up giving it three stars on goodreads.

Image Comics is a powerhouse company with some of my favorite comics including Papergirls, Nailbiter and Sex Criminals. It features magical creatures, fancy coffee drinks and female friendship. Chet is a poor centaur who lost her legs in a magic show, can Julie return them and defeat the magician? Honestly one of the best comic series I have read, I gave this five stars on goodreads. 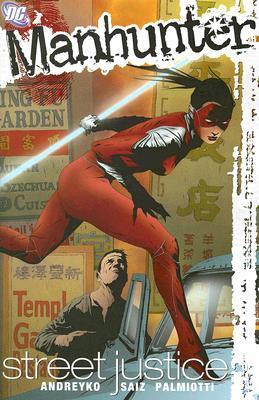 Kate Spencer is a hard assed, cigarette smoking, swearing attorney. She is angry when a criminal she’s prosecuting gets let back into the city. She steals weapons from a police locker and goes to kick some ass taking on the mantle of Manhunter. Think Daredevil, but DC Comics version and Kate Spencer is kind of unlikeable. This came out in 2005 which means I was in fifth grade when this originally was published. It feels a bit dated, but it didn’t bother me when I read it. I gave this four stars on goodreads and I do intend to buy the other volumes.

I don’t know what I was expecting, but this read exactly how it plays in the movie. I did like that parts of the book were told from the perspective of Bodhi, Cassian and KTSO. Rogue One is my favorite Star Wars film because of how it brutally depicts war. I felt the original Star Wars trilogy was lighthearted all the time whereas Rogue One you fall in love with the characters to watch them all die as their war rages on. Anyway, I would recommend this if you love Rogue One as much as I do. I gave this three stars on goodreads.

I have read 11 books out of my challenge to read 20. I mentioned this in another blog post, but I always start my goodreads challenge at 10 and increase it every time I meet that goal. That way instead of feeling defeated because I didn’t read as much as I wanted to, I get encouraged because I can increase my goal if needed. Tell me what you’re reading in the comments as I’m always adding to my goodreads to be read shelf.

6 thoughts on “2018 Reading Challenge Check In”