Last weekend the boyfriend came back home after visiting his parents all week. Besides eating my weight in homemade oatmeal cookies, me and the boyfriend took a date night and saw Logan. The boyfriend has been re-watching all the X-Men movies in chronological order for the first time which sparked a renewed interest in the X-Men. Surprisingly, the X-Men are the group of superheroes I know the least about because way back in 2000 when the X-Men movies premiered, I was playing with Barbies or too focused on Harry Potter. Deadpool was a success being an R rated superhero movie so Marvel set out to finally get the Wolverine the movie he deserves. I have to say for someone who doesn’t know a lot about X-Men/Wolverine, I felt that this movie captured the essence of Logan.

The titles appear on the screen along with Logan being tied up at the back of a limo. The Wolverine escapes and he attacks the men viciously after they shoot him repeatedly with a shotgun. The violence of this scene isn’t too graphic compared to Deadpool’s over the top gore. After this scene the audience starts to see that Logan isn’t healing like he’s supposed to which begs the question of how invulnerable is Logan? Logan does show humanity by the way he caters to the older Charles Xavier. Charles claims to have been communicating with a mutant which Logan doesn’t believe. Eventually Logan meets Laura and how she was stolen from a research facility that was trying to create mutants. Laura is X-23 aka. Logan’s daughter made from his stored genetic material. Laura, Charles and Xavier go on the run because of Charles wanting to protect Laura from the vile men hunting for her. 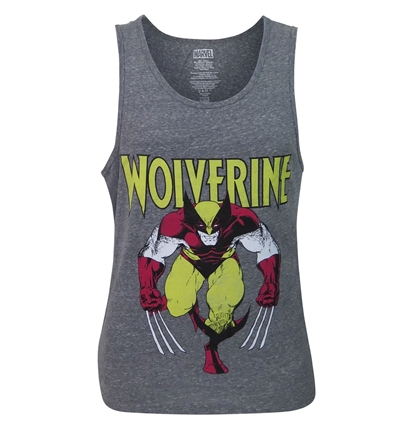 Should this be my new workout tank top? I’m thinking Yes? Seriously spoilers below.

The R rating from this movie stems from Logan continually using the word “fuck” and from the gore in this movie. Again, I still feel that Deadpool is way worse in regards to the violence versus Logan. The end of this movie is rather touching as Wolverine develops a powerful relationship with Laura that he is willing to die to save her. Laura watches Wolverine take his final breathes as she cries and buries him in the forest. This gives Laura a reason to get to safety and start over as a mutant free of control.

I haven’t read the Old Man Logan graphic novels, but I definitely added them to my list. Logan was epic and a loving tribute to Hugh Jackman who played this role for almost two decades. I’m curious by whether or not Laura will take over the franchise and how this movie will relate to the other X-Men movies. On a darker note the sneak peak into the new Deadpool movie is promising and hilarious in a really awful way so pay attention to that for when you see Logan in theaters ASAP.