I feel very grateful that I have a sibling. My brother is three years older than I am and since going off to school, my and my brother hang out whenever I come home. Today my brother and me went to the local comic book store by my house. Recently, I have been reading more comic books and graphic novels. It’s become a new interest of mine.

Hot Comics & Collectibles is fifteen minutes from my house. I’m pretty sure I have been there before because I felt a feeling of deja vu when I entered the store. It’s a pretty cool place. As soon as you walk in, there’s boxes and boxes of individual issues of comics. That’s where I first looked. I love individual issues of comics because it gives me a feel of what I will like and won’t like. Each issue is around three dollars. If I don’t like a certain series or character, I didn’t really waste that much money instead of buying a graphic novel for fifteen-twenty bucks and not liking it. They also had some really cool action figures, Magic the Gathering cards, Doctor Who memorabilia and books. I ended up purchasing comics that revolve around Elektra, Fantastic Four, Hawk & Dove and the Huntress. I would definitely go back there again! It was a cool store, and I could easily spend hours going through each of the back issues of each superhero. 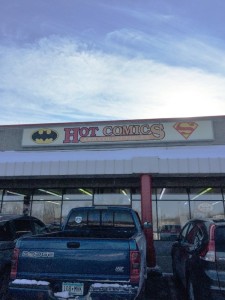 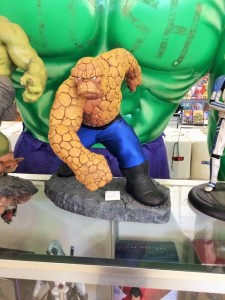 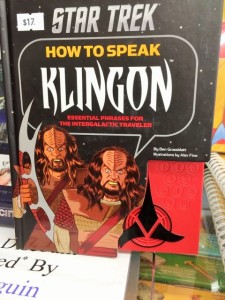 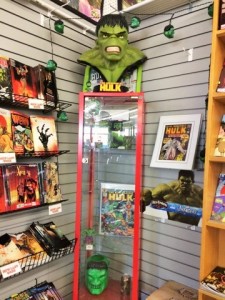 These are some of the pictures I took. There was a section in the store completely devoted to the Hulk. I really wanted to find those Hulk string lights because I thought they were awesome but I couldn’t find them. I found this book about speaking Klingon and that made me think of the Big Bang Theory and the episode where Sheldon, Leonard, Raj and Howard play Klingon boggle. The action figures that I saw were amazing. The Thing action figure cost around 650 dollars but it’s insanely accurate and actually pretty big.

I would definitely come back here again but right now I have plenty to read in between the books I have on my reading list (see my other blog post) and these graphic novels, I probably won’t be back for a while. I have two weeks left of winter break so it’s time to get reading!