In February, I was honored to be contacted by Mad Cave Studios to read and review their major comic series. I chose to write those reviews on Twin Cities Geek instead of Bizarre Brunette due to the bigger fan base. Mad Cave Studios is incredibly busy as they’re prepping for a new comic series to launch titled Show’s End which takes place in a 1920’s circus. This series has a strong Halloween / creepy horror vibe and I’m here for it. Here are my general opinions on the series I received from this Miami based comic studio.

Midnight Task Force is a fantastic, cyber-punk comic series taking place in a corrupt futuristic Detroit. Midnight Task Force features Aiden McCormick, an intelligent detective investigating a series of grisly murders. Aiden secretly battles schizophrenia dating back to his PTSD from his days serving in the military. Can Aiden keep his sanity throughout the cat and mouse chase of hunting a serial killer?

The artwork in this comic is dark, but alluring. It gives Detroit this crime ridden feel while also adding bright neon colors to make Detroit seem more attractive than what it actually is.

Ultimately, this comic went in a different direction than I had originally anticipated. Without giving spoilers, it seems that there’s more to the serial killer Aiden was investigating. There’s also a nice cliffhanger towards the end of this volume, which leaves me intrigued as to how Aiden’s character will develop over the course of the series run.

2. Knights of the Golden Sun

I’m shocked to tell you this, but I deeply enjoyed reading Knights of the Golden Sun. The reason why I’m saying this is it’s a comic that’s inspired by events in the Old and New Testaments of the Bible. I’m not a religious person and I don’t plan on ever converting to Christianity. Reading Knights of the Golden Sun didn’t feel “preachy” and the way this comic is paced allows for every character to have their moment of glory. 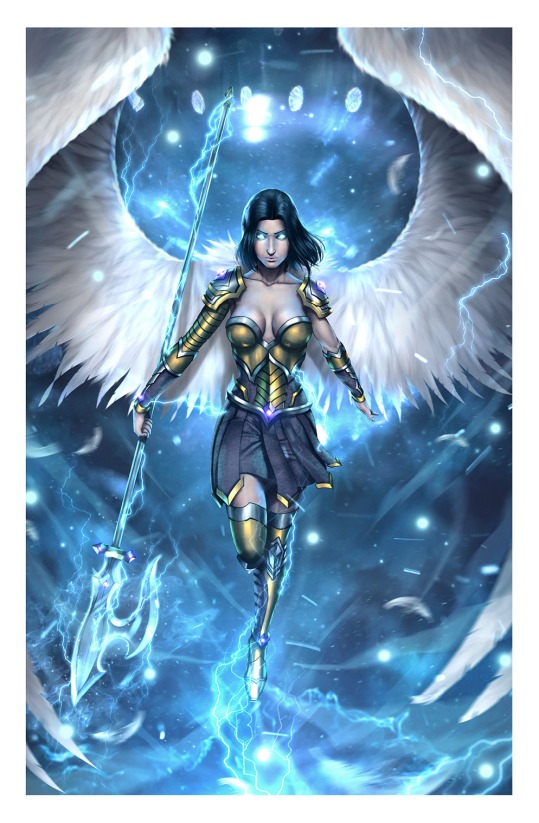 Uriel in all her glory. Image from Mad Cave Studios.

Knights of the Golden Sun takes place between the Old and New Testaments and describes the battle between God’s angels and “The Fallen” which were a group of angels exiled by God himself. There’s a lot of beautifully illustrated battle sequences within each issue. My favorite is Uriel and how she summons this cast of blue lightning which she utilizes to battle with a group of giants. 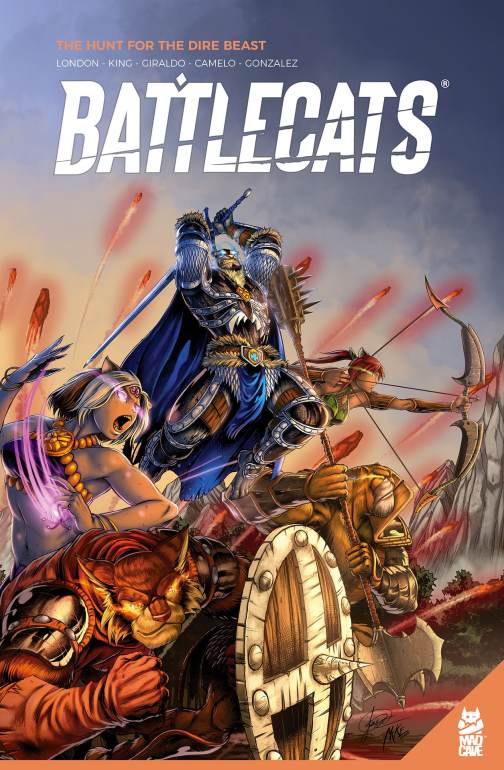 Battlecats is the final series I received from Mad Cave Studios. Battlecats is a medieval, fantasy epic with elements of DnD mixed with the 80’s TV show Thundercats. In the beautiful realm of Valderia lies the Battlecats, a team of cat warriors sworn to protect Valderia at all costs. The Battlecats are sent to destroy a Dire Beast who threatens to encroach on Valderia’s territory with intent to endanger Valderia’s citizens. As the Battlecats investigate the Dire Beast, they recognize how this beast isn’t like the other creatures they have killed before. What does this mean for Valderia’s future?

Honestly, I was slightly disappointed by Battlecats. I’m all about great character development and I felt there were too many characters introduced without backstories. This made it difficult for me to become invested in the story since the characters seem largely forgettable.

Another minor annoyance comes from the added information about Valderia with its seasons and moons. This information was intriguing to read about, but it would have been better if it was included in the beginning of the book where it could be easily accessed again throughout the story. Instead, I have to flip back to the middle of the book to reference the information which felt awkward as I was reading Battlecats.

Despite my disappointment with Battlecats, I do intend on continuing with the story. The first graphic novel has potential and I’m hopeful that in the next volume we will learn more about the characters.

Mad Cave Studios is a comic studio to watch for. With the addition of Show’s End, another series was announced Thursday titled Wolvenheart. Wolvenheart is described as a, “time-travel, steam-punk, Victorian comic. I’m excited to get my hands on both Show’s End and Wolvenheart as Mad Cave Studios has proved to be a talented and driven comics studio.