So if you were hiding under a hole this past week, the new Star Wars trailer was released. Personally, I am very excited for this movie and I think it will be the biggest movie of this decade! That being said, I found some really cool Star Wars items that I really want to buy for myself because they are fantastic!

Guardians of the Galaxy/Star Wars T-Shirt from TeeTurtle!

I found this really cute t-shirt from teeturtle.com. It comes in a t-shirt and a hoodie! Since winter is coming around, the hoodie would be perfect! I love this design because I loved Guardians of the Galaxy! This is the perfect mashup! I might have to purchase this since the hoodie is only 25 dollars..

I found this Millennium Falcon rug on Amazon! It’s huge! I would love to put this in the living room in my apartment. It’s 59” by 79” and it’s around 100 dollars. It’s a little expensive for a rug, but it’s the Falcon! Also the fact that it will make a reappearance in the Force Awakens is really nostalgic.

I don’t usually bake by myself all that often.. but that might change if I got my hands on these! I love the Yoda one! I would definitely bake more if these were in my kitchen.

I collect key chains and I don’t have any Star Wars related key chains on my keys right now. This would be perfect! It even plays James Earl Jone’s voice! I would have to be careful that it wouldn’t just go off in class, but this would be really awesome. It’s only 17 dollars which isn’t too bad. I found this cool key chain on superherostuff.com 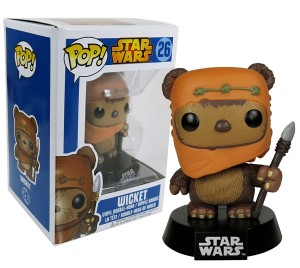 I happen to adore these Pop! figures. I love the Ewok’s including Wicket. I think these are super adorable! I always get sad when the scene from Return of the Jedi when one Ewok dies and the other Ewok can’t get him to wake up. It always depresses me when I watch that scene in the movie. Anyway, this figure is adorable and I would love to have it sit on my desk while I study.

These are Star Wars items that I would love to get my hands on! And if you haven’t watched the Star Wars trailer yet.. WATCH IT! The Force has been awakened.